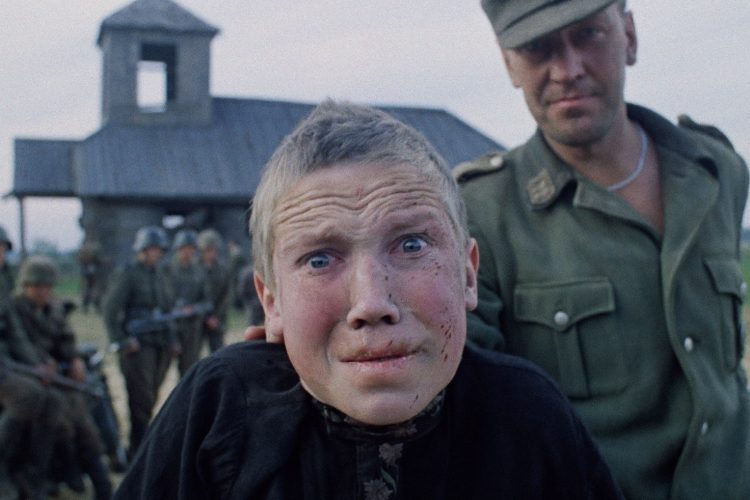 Thursday, July 23rd 2020;  Here is a report of what I’m feeling right now, as I have just finished this film:  I feel unsettled…horrified…shocked…saddened…haunted…angry…and it’s partly because the source that introduced me to this film was correct…This might be the scariest movie ever made.  Here I will try to be primarily spoiler-free.  In what became Elem Klimov’s final film, this is Come And See

What’s it about?  It’s about war.  More specifically World War 2 in 1943, through the eyes of a naive 15 year old boy named Flyora (played by Aleksey Kravchenko), from Belorussia (now Belarus), who wanted to be a Soviet Parisian in order fight the Nazis.  Shortly after finding a rifle buried in the sand at the beach, he is picked up by the Parisians and then leaves his mother and twin sisters behind.  After he was then left behind by the Parisians to guard their camp (due to an older soldier needing new boots and getting Flyora’s boots in the process), Flyora develops a friendship with Glasha (played by Olga Mironova), a nurse at the camp whose dream is to be a lover and a mother.  When an air strike destroys the camp and paratroopers arrive to clean up, it was enough to make Flyora and Glasha run back to his village as a means of love and safety from it all…however it is from here on that the real nightmare truly begins.

Now onto the realities:

It could be argued that Aleksey Kravchenko, the teenager who plays Flyora, is among the greatest child actors of all time from this movie alone.  Word is, he experienced so much stress while on the set that his hair started to turn white, and we see his face change from an optimistic, smiley and ruddy young boy looking for adventure, to a traumatised young boy who has seen so much death, suffering and evil that he aged 40 years in 1.  The acting from everyone else was absolutely fantastic.  It has been suggested that the larger group of Nazis (rather than the select handful that leave the biggest impact) came across as a bit buffoonish or yobbish – but it’s unsettling to watch none the less.  The face that 1 Nazi in particular (played by Jüri Lumiste) had when he tells of his beliefs, or more specifically his perception of those he is hurting…it’s frightening.

The Characters are “every person”, with roles based on real life counterparts.  These characters could be us, ranging from everybody living a simple life before being thrown into this nightmare, to ordinary men who were indoctrinated to do great evil, and other men, fearing for their lives or simply looking to join the winner, collaborating with them (As several Ukranians were among the Nazis).  Flyora’s role in the film has elements of Christian Bale in Empire Of The Sun (which came out 2 years later) in the sense that he has no big picture in his head when he sets out to do what he wants with his life.  In Bale’s case, it was to have his cake (escape the invading Imperialists with his parents) and eat it (retrieve his toy plane, which he dropped in the frantic crowd).  In Flyora’s case, It was to either live out his dream alone and/or with strangers…or forget the dream and die with everything he knew and loved.

Though the story is fiction (based on the novel ‘I Am From The Fiery Village’), it is made up entirely with building blocks of real life events, and is a cry for remembrance.  Remembrance for the dead and left-for-dead of the Belorussian people while under Nazi Occupation.  A remembrance of the 600+ villages that were destroyed, including Khatyn, and the 2.3 million Belorussians who died in the war (It might be ‘small’ compared to other countries in the conflict…but that was 25% of their population!).  There isn’t really a plot to speak of, only a series of events that happened somehow and somewhere to someone during those 7 uncertain years, and in this case, they were happening to or being witnessed by Flyora.  Very simply, this is his story.

The Art and Design aspect is among the most realistic you will ever see in cinema.  Here is some examples as to why:  First of all…real ammunition…to the point that Aleksey Kravchenko was 10cm away from losing his real life on several occasions.  Then there’s the uniforms, which were real.  Those aren’t costumes.  Those are 40-45 year old outfits that were worn by the Nazis, the Partisans and the village folk.  Real locations.  Real fires.  And because the USSR chose to maintain its military history better than most, a lot of it feels very authentic.

The Music consists mostly of 4 things; Oleg Yanchenko’s score, which brings a sense of dread and horror to each scene it appears in.  Classical German and Austrian pieces, which includes Mozart, Strauss and Wagner that occasionally get mixed into Yanchenko’s score in a similar fashion to how “Everywhere At The End Of Time” by The Caretaker mixes Big Band music from the 1920s into gradual distortions to replicate the sounds heard by a person with Dementia.  Both a Russian and Soviet selection of folk and military songs…and then there’s the silence…silence to let the eeriness slowly follow you until it’s breathing down your neck.

There is no CGI, and the special effects would be in the gore, make-up and deliberate destruction.  There was some fireproofing.  Some facial ageing.  Some fabric damage.  Everything I’ve seen in this area has been very dramatic.

Aleksei Rodionov’s Cinematography is a stand out in the film due to the brilliant use of both Steadicam and close up shots, which contribute heavily towards the visual horror and foreboding terror.  Not just in the presentation of intense violence, but also the faces of the actors.  They are positioned in such a way that when they look at the camera, they are looking at us.  As if we are doing these things or seeing them like we are there…and almost as a “please…please stop this”.  On top of that, to the disturbance of viewers…there is some real life footage mixed into the editing.  You’ll know it when you see it.

Would I recommend Come And See?  Yes…But only to a careful selection.  Is it 1 of the greatest movies ever made?  Absolutely!  Is it 1 of the greatest war movies of all time?  Absolutely!…and that’s besides the point.  This film is not for our entertainment.  It is a masterpiece in artistic and realist cinema, and 1 of the best expressions of its subject matter that I’ve ever seen…and that’s why I can’t recommend it to just anybody.  When war veterans have cried and called this movie “The Truth” where every other war film seems to fail – that’s when it hits you.  This film is a heartbreaking depiction of lost innocence and an overwhelming mountain of depravity, and I will probably talk about it from time to time for the rest of my life with the same shock that I have now.  Truly unforgettable…and that’s the point.