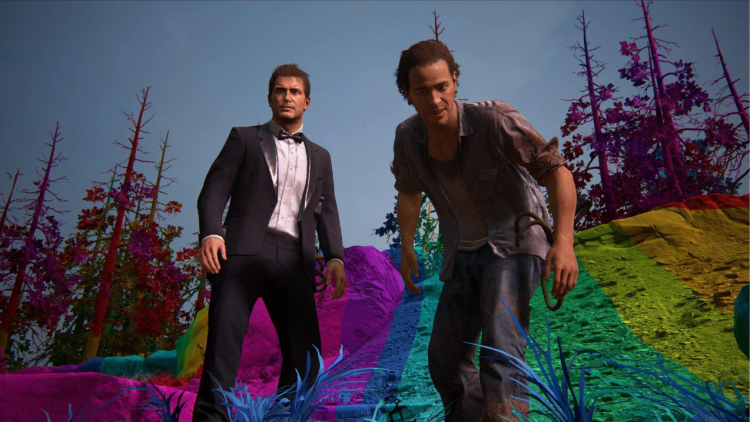 Right, we’re now on the last game of the Nathan Drake series known as Uncharted 4 A Thief’s End.  What is entailed when it’s called a thief’s end?  So much is left up for interpretation.  But that’s for you to witness.  So here we go.

Our story starts with Nathan Drake on a boat in the middle of the ocean with another man by the name of Sam.  The sea is incredibly rough due to a huge storm, and they are being chased by a huge militia.  Their boat is basically destroyed.  Several flashbacks happen to provide us with some more backstory to Nathan, including his time at the Catholic Orphanage and his time in prison in the late 90s.  We then see where Nate is, several years after the events of Uncharted 3 – He’s now retired from adventure and living an honest life working as a diver for a Marine Salvaging company.  He’s back with Elena, and their life is nice…but a bit boring for them.  However a job offered to Nathan in Malaysia seems to provide him with some excitement…His life then changes when Sam – his older brother, whom he thought dead, has returned with a request. He broke out of jail with the help of a ruthless man, who wants a huge payout from Sam in exchange for his life, through treasure.  The treasure?  Henry Avery’s $400 million fortune from the 1695 gun heist – a huge stash that has allured the brother since they were teenagers.  Reluctant at first, then giving into temptation – Nathan lies to Elena, saying he is taking the job in Malaysia – and with the help of Sully, they head to Italy to retrieve their first clue – the St Dismas Cross (a wooden idol of the thief to whom Jesus Christ said “On this day you’ll be with me in paradise”).

Now to venture into the details:

The graphics…The graphics are absolutely amazing, as it not only surpassed what The Last Of Us had accomplished, but it managed to be easily 1 of the best looking games on the PS4.  Much like the original trilogy was on the PS3 (before it was remastered on the PS4), it flows at the cinematic frame rate of 30 frames per second (The trilogy flows at 60FPS on the PS4) which provides a nice touch…and when you consider the size and detail of the game…maybe it’s for the best at this time, unless the Playstation 5 offered a 60 frames version.

The art style is absolutely inspired!  So much variety in the scenery, so much to look at.  A truly organic looking game.  I really went all out with the game’s Photo Mode.  Adoring everything that was presented to me, and almost wishing it was real.

The gameplay…if you didn’t think they could have upped the gameplay from Uncharted 2, you’re in for a surprise.  Along with Nate’s melee attacks being improved yet again, We’re also given new ways of attacking and getting around.  You now have the option of driving, whether it be by boat or by jeep (rather than just being the gunman all the time), the ability to take out hordes of soldiers using only stealth (much like Metal Gear games), and of course…the grappling hook.  Which adds more to the puzzle aspects of the exploration.  I had an incredible amount of fun with this, and didn’t feel any boredom from it.

The music for the first time in the series’ history is not done by Greg Edmundson, but rather Henry Jackman, whose CV includes Kingsmen: The Secret Service, Big Hero 6 and both Captain America: The Winter Soldier and Civil War.  To be very clear, this doesn’t stop the game from having a highly memorable score in its own right.  By not having its original theme song, it instantly suggests a change in direction or simply something new…and that something new is from being played on the next generation system.

Uncharted 4 has a bittersweetness to it when you consider that Amy Hennig, the Director and 1 of the 3 writers of the original trilogy, wasn’t involved in this game.  However, despite her absence, the story is excellent.  Really excellent in fact.  If you’ve journeyed with these characters before, then you’ll notice that this is the series’ storytelling at its most advance and well polished.  While The Golden Abyss was full of one-upmanship in dialogue – Uncharted 4 managed to make this game absolutely hilarious.  The banter between all of them, not just Nate, Sully and Sam, is fantastic.  It remembers the importance of fun, but at the same time it manages to avoid some cliches.  This game is also where you see Nate and Elena’s relationship at its most mature, as it is here we see Elena’s greatest acceptance of who Nate is and what he does, as well as Nate’s feeling that he really has something to lose.  The main villains, Rafe Adler and Nadine Ross, would in their own right be pretty scary.  Rafe is a smirking, selfish, millionaire psychopath who reminds me of pro wrestler Mike “The Miz” Mizanin, while Nadine, a paramilitary leader, is more or less a South African Melina May – You don’t get into a fist fight with her.

Would I recommend Uncharted 4?  Yes – if you’re a human being.  Uncharted 4 took what made every instalment before it great, and created what is likely the best possible outcome.  It’s refined, yet with more to see and do.  It’s possibly 1 of the funniest games I’ve ever played.  So full of life and intrigue.  If this is the last time we ever play as Nathan Drake, I don’t mind, because it might never be topped.  An absolute pleasure of a video game.