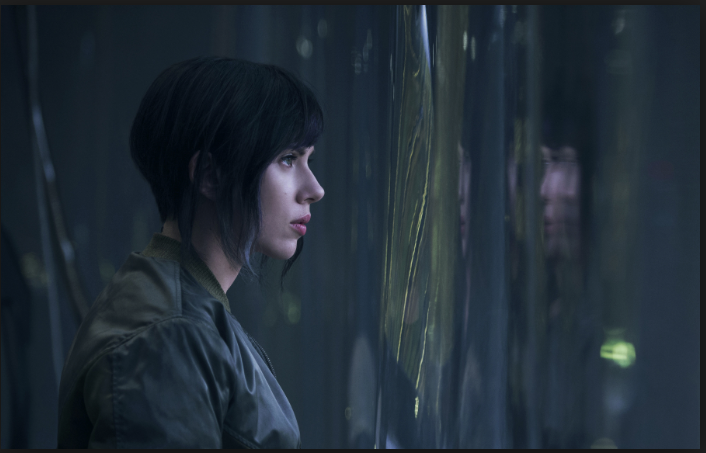 Dear goodness…the amount of crap this film got while it was in production was staggering, and the amount of crap it’s getting now that its been released to the public hasn’t actually subsided.  “They’re whitewashing a Japanese story by casting an American in a Japanese role”  “It’s a hollywood movie – so of course they’re going to mess it up, since it’s something we love and they want to destroy it for profit!”  “How dare you… in general!”  But is it really as bad as they say? – lets find out.  Keeping in mind, I’m a Ghost In The Shell fan who enjoys the movies, TV show and Manga.  So here goes:

Set in the near future (around 2029, since the manga is a product of the late 1980s), our story revolves around Major Mira Killian (Major Motoko Kusanagi in the other stories and played by Scarlett Johansson), who awakens after what seems like the aftermath of a horrible accident involving a refugee boat.  She finds herself lying on a table.  Her body is that of completely augmented cybernetics – a robot body that resembles a human being is nearly every way.  The only ‘old’ thing about her, is her brain, hence her ghost.  Shortly after this, she is flung into working for the anti-terrorist organisation known as Section 9, which includes Chief Daisuke Aramaki (played by Takeshi Kitano from that kooky Japanese game show Takeshi’s Castle), ex-ranger Batou (played by Pilou Asbæk, aka Euron Greyloy in Game Of Thrones), full-human detective Togusa (Chin Han), behind-the-scenes guy and tech specialist Ishikawa (Lasarus Ratuere) and the sniper Saito (Yutaka Izumihara).  When a hacker is using other augmented cybernetic beings to kill off key figures at a Hanka Business Conference, it’s up to Section 9 to find out who this hacker is, and to stop him.

Now to talk about various factors:

First of all, the main 1s that people complained about – the casting, acting and characters.  They complained about whitewashing the film…even though it’s a multinational cast.  You have a Jewish American, American, Japanese, Danish, French, Chinese-Singaporean, British varieties, Fiji-Australian, Romanian and Canadian, among others.  To suggest any racism involved is complete madness!  Consider the possibility of them trying to please the culturally sensitive…and Ladriya?  Ladriya is new!  She’s played by a Kurdish-Pole from London named Danusia Samal, and why is she there?  Because in the source material the Major stands out by being the only female in Section 9.  You want a strong independent woman?  The Major in the anime and manga could beat up the rest of Section 9 with the possible exception of Batou.  They added a 2nd female to the team to avoid accusations of male-dominated workplaces in movies.  It also needs to be considered that there are justifications to such choices throughout the flick.  One of which would be a spoiler.  Another is to recognise a very subtle possibility, which is immigration.  The prospect of Non-Japanese people living and working in Japan.  It’s already happening.  What if some politician decides to open the borders, UK and US style, in Japan in the future?  It’s unlikely.  But consider everything.  It is a seemingly unwritten future doomed to repeat itself after all…then you take the narrative of Ghost In The Shell to thought – The Ghost In The Shell universe saw World War 3 from 2000 to 2015, the second Vietnam war from 2015 to 2024 and the second Korean war which takes place in 2024…That can merit immigration to some.  Was the acting world-class?  No.  But it worked fine and nobody was bad, even though Kaori Momoi would probably have been more comfortable speaking Japanese rather than english…but then again she isn’t speaking to a Japanese character.  They did their jobs pretty well.  Nothing stood out as amazing acting, but nothing fell into Tommy Wiseau territory either.  The characters, when compared to their anime and manga roles, were mostly moved a bit out of the way to focus on the Major and occasionally Batou.  We forget that this mostly happened in the 1995 anime movie as well, but we love that movie and don’t question it, so we continue poking at the flaws of this 1.  Did they tell a different story that isn’t in the source and is different to the 1995 version?  Yes!  How Batou got his eyes is different (in fact, it’s given an origins to those who haven’t seen any other material) and how the Major came to being is different…It is its own film borrowing from excellent sources, like samples for every rap song you ever loved.

The art style and decisions borrow a great deal from Cyberpunk and particularly from the legendary film Bladerunner.  People can argue that it “doesn’t cover much new ground”, but I say it’s a welcome return to some charismatic and likeable settings.  I miss good looking cyberpunk, and I’m happy to see it return in some way.  You’ll notice a lot of interesting choices, from ’90s haircuts to smoking to heroin chics to Hologram advertising to dark passages and night clubs…it has character.

The music is done by Clint Mansell, the english composer who has done every Darren Aronofsky film (and is famous for his composition Lux Aeterna) – he provides an excellent soundtrack that is pure cyberpunk and very 80s (in a good way).  At the same time, he manages to take Kenji Kawai’s score from the 1995 Ghost In The Shell and both faithfully and respectfully reintroduce it to the public with remixed elements.  The music helped make this film feel like a classic cyberpunk film…something I’ve hoped to see in a while.

The Story is easier to digest than its anime original and the manga, and for good reason, 1. It’s Hollywood, and 2. The Manga is chaotic with a lot of fine print about technology and engineering.  You’ll find the movie scattered here and there throughout the pages of what is a very episodic read.  Is it bad?  No, in fact it’s quite a tight film in its own right if you treat it as an interpretation of the series rather than a piece of the puzzle.  “The film was humourless” some people have said – well, the 1995 film was mostly humourless as well.  The manga and the Stand Alone Complex TV series are where you’ll find most of the humour injected into the characters.  Then there are the other films – 1 thing that wasn’t covered in this film that was in the 1995 version was sexuality and gender identity, as the Major’s body is designed as a mechanical replication of a woman, rather than 1 that has everything from before, including being capable of reproduction (If this is the future of the human race or man’s forced attempt at evolution, this factor is to be considered).  Here it was all about Major’s identity and questioning her own humanity, and sometimes that’s fine.

The Cinematography was done by Jess Hall, whose work includes Edgar Wright’s Hot Fuzz…And he did phenomenal work!  He stated that he wanted to pay homage to the anime through both his choice of camera (wide-angle with no lens distortion) and his choice of perspective.  While it’s a loose interpretation of the 1995 film with many differences, he managed to faithfully remake in live action some of the ’95 film’s most famous scenes, including the Major’s development, the shallow water fight scene, the rooftop scene and the boat scene, to name a few.  The lighting was well chosen, as was the colour grading.

Would I recommend Ghost In The Shell, the 2017 whitewashed hollywood-bastardised monstrosity that deserves to die 1000 deaths film?  Yes.  Yes because I know you’re a much more intelligent person than you’re letting on.  Yes because the madness of crowds is exactly what it is – a big pile of temporary fluff that comes and goes like fog.  Useless.  Boring.  Dying.  It is up to us to decide if we like this or not by seeing it.  While it’s not as good as the Anime film, or even other Ghost In The Shell related outlets…I see it to be a good starting point into the series (some even consider this an old persons series now…like Power Rangers, Transformers and Chips), and after that starting point you’re free to call it the worst of the bunch.  But in my opinion, it didn’t deserve all of the crap it got or the low ratings.  It is what it is, an easy-to-digest sci-fi movie that chose not to be overly complicated.  It’s also porn for a visual artist, especially in its photography, music and design.  I loved looking at it, so even during some of the different story elements, my eyes got a feast.