This will be a slightly different review, because I’m not only reviewing a sequel, but I’m also reviewing a film that focuses on the same topic as another review that I’ve written.  This is The Conjuring 2.

Set 5-6 years after the events in the Conjuring 1, our story once again involves our 2 favourite characters from the prequel, the paranormal investigation couple known as Ed (played by Patrick Wilson) and Lorraine Warren (played by Vera Farmiga).  Our movie begins with 1 of the most famous paranormal cases that they were both involved in – The Amityville Horror.  In 1976, Lorraine tried to figure out what happened in the house, which leads to her re-intacting Ronald Defeo’s actions on that November 13th night in 1974 while in a trance.  What I loved about this opening is how they used a piece of reference material…the young boy, who appeared in photographs of the house, and wasn’t actually in the house.  Lorraine decides to follow the boy into the basement, where she meets a demonic-looking Nun, and a vision of Ed’s death.  Something that bothers her so much that they end up retiring from cases (but still lecture and take part in debates on the paranormal in universities and on TV).

Fast forward a year, we travel to London, England, where we meet the Hodgson Family, consisting of single-mum, Peggy Hodgson and her 4 children; daughters Margaret and Janet, and sons Johnny and Billy.  After Janet plays with a Ouija Board that she made with a friend from school (or at least someone she tried to be cool around) with Margaret (who dismisses it), strange things start to happen in their council house.  Stuff starts to get moved around, the electricity has a mind of it’s own, Janet starts conversing with “nothing”, and much like the mini-series I reviewed, The Enfield Haunting, the spirit of an Old, Evil Man is oppressing and scaring them.  When the Police witness the hauntings and find that this is something out of their abilities, they suggest help from the Church, who then approach Ed and Lorraine, telling them that they need to help this family.

Now to break it down:

When compared to the Acting in the Enfield Haunting, at times it’s better and at times it’s just different.  In the Enfield Haunting, I sort of preferred the presentation of the Hodgson Family (Overall), while in this film I much prefer the choice of investigators.  In this film, the Hodgsons are more like a typical, innocent American horror movie family.  In the Enfield Haunting, the kids are a lot more lively and like regular, cheeky children from London, especially Janet – this includes the difference in the actress playing Janet.  Eleanor Worthington-Cox was much better at playing a wee girl from London with an attitude, while Madison Wolfe did a better job playing a possessed little girl…if you know what I mean.

Somebody has been left alone a little too long.

The Characters are what make this film work without being too comedic – Patrick Wilson and Vera Farmiga provide charismatic performances with moments of humour in between the scares, and with Patrick Wilson’s performance oddly enough reminding me of Michael Keaton, which was pretty cool.  Vera Farmiga’s performance has moments that remind me a little of Eva Green in Penny Dreadful and Marion Cotillard in drama roles.  I feel like I’ve gotten to know these characters more so again, and I’ll be up for a third 1 if possible.  The villains in this film are as good, if not better than the 1 that haunted the Perron Family in Rhode Island.  The Demon Nun, The Crooked Man, and the Ghost of Bill Wilkins (not a pleasant chap, whether you watch this or the Enfield Haunting) were all excellently portrayed.  You’ll also notice that Maurice Grosse appears in this (Main character in The Enfield Haunting) being played by Simon McBurney – compared to Timothy Spall, definitely looks the part more, and acting-wise, they’re both roughly the same.  Guy Lyon Playfair doesn’t appear in this version, but that’s okay – it would have been too crowded with him there as well.  Also, compared to the Enfield Haunting, you don’t see how badly bullied Janet is at school – especially over the news coverage they received about it.

The Story tells Ed and Lorraine’s side of the Enfield Haunting story, while The mini-series The Enfield Haunting, focuses on Maurice Grosse’s side.  Overall, it was a better story than both it’s prequel and the Mini-Series.  It uses the rule of pairs a lot – some could say it’s symbolic for Ed & Lorraine’s relationship and how anything that isn’t a pair is a sign.  Much like the Enfield Haunting, The Conjuring 2 chose to respect both opinions on the case – It provides the skeptics with their fill, while at the same time it provides the believers with theirs.  In the area of feeding the believers, it does use some creative license (The room of crosses wasn’t real, for instance), and the ending wasn’t documented, which leaves it open for interpretation.

Much of the music by Joseph Bishara (who also did The Conjuring 1) is oddly subtle…so subtle in fact that you would assume you were hearing cars outside the cinema (But listen closely and you’ll know it’s music).  For the most part, the music’s very good, and dynamic when it needs to be.  The film also features some good original songs too, including The Clash’s song London Calling (Which works for setting the scene of London, but is historically inaccurate as the song was recorded in 1979 & the film is set in 1977), ‘I Started A Joke’ by The Bee Gees, and of course, “Can’t Help Falling In Love” by Elvis Presley, with both the song itself, and as an acoustic cover played by Patrick Wilson as Ed Warren (Which he does really well and with tongue and cheek humour!).  Other times the music is very reminisce of ’70s Horror like The Omen and The Exorcist, other times I feel like I’m hearing the rare “Are You Afraid Of The Dark” intro from Season 1 Episode 5.

The Make-Up, Special Effects and design choices in this film are absolutely top-notch!  Literally, some of the choices they’ve made are so clever, you’re thankful they did them.  The demonic Nun (Who won’t be named for a spoiler-free review), though a bit of a cliche now, is terrifying (Bonnie Aarons didn’t have to do very much, but the shape of her face, plus all of the make-up, the Nun-outfit and the lighting, works brilliantly), as is the occasional presentation of the old man.  But in terms of decisions – The Crooked Man was 1 of the best, mostly because of the actor they chose – Javier Botet.  Botet has Marfan Syndrome – a physical condition that gives him very long arms, long fingers, long arms, long toes and a long spine that distorts the upper body’s shape.  This means that when it came to presenting this boogeyman creature with unusual movements – it wasn’t CGI.  Also, Madison Wolfe (who plays Janet Hodgson) was almost unrecognisable to the point that Patrick Wilson (who worked with her on a film before) didn’t know it was her.  Blonde, blue-eyed and American, She wore brown contact lenses, had brown hair and an English accent for the role, and appeared much more grown-up compared to how she looked 2 years ago when she played Woody Harrelson’s daughter in True Detective Season 1.  Quite a transformation. 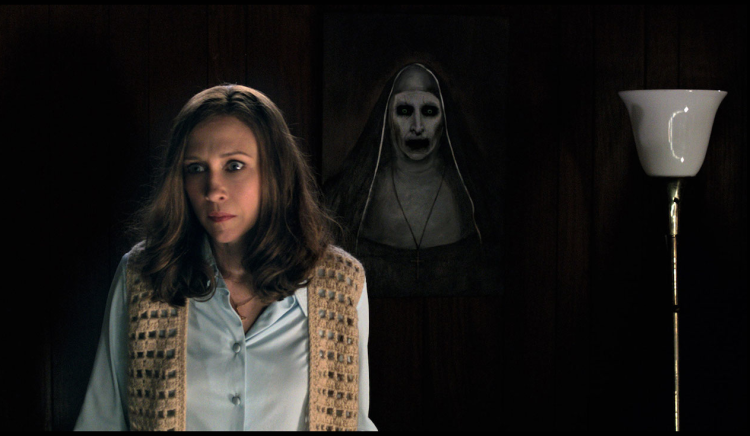 The CGI was good, but also pretty obvious, and at the same time it didn’t add to much to the scares.  It progressed the story without making a mess on the set, and I can appreciate that reason.

The Cinematography was for the most part excellent and artistic in approach.  It contained a combination between clever focus, the presentation of shapes within frame, such as a diagonal shot of the staircase.

In terms of Horror and scares, The Conjuring 2 doesn’t play tricks.  Instead of tricking the audience into fear, instead it chooses to build up every scare bit by bit.  No hiding cats and no people going ‘boo’, the only area that sees the film toying with you is in the timing, which is scary, even when you know it’s coming.

In terms of Historical accuracy -the film does take some liberties – especially by the third act.  Much of this area becomes a matter of “This is where the facts ended and the fiction goes at it alone”.  Within context, only those who were personally involved could say that this stuff really happened.  The movie makes this message clear, as did the mini-series, and that’s the main way you’ll receive new stories out of this case without choosing any sides.  However, the real Janet Hodgson did say that when it came to whether she was lying…She was telling the truth 98% of the time.

Would I recommend The Conjuring 2?  If you’re looking for a good horror movie, this 1 is a no-brainer.  I consider it to be better than both the Enfield Haunting and The Conjuring 1, and in terms of what it offers outside of the horror, it’s actually a good quality film in it’s own right.  Also, the prequel isn’t absolutely necessary viewing, so don’t feel like you have to wait until you watch The Conjuring 1.  If you like great horror, go see it.  To make it even weirder – This can actually qualify as a Christmas Movie.  I’m not kidding.