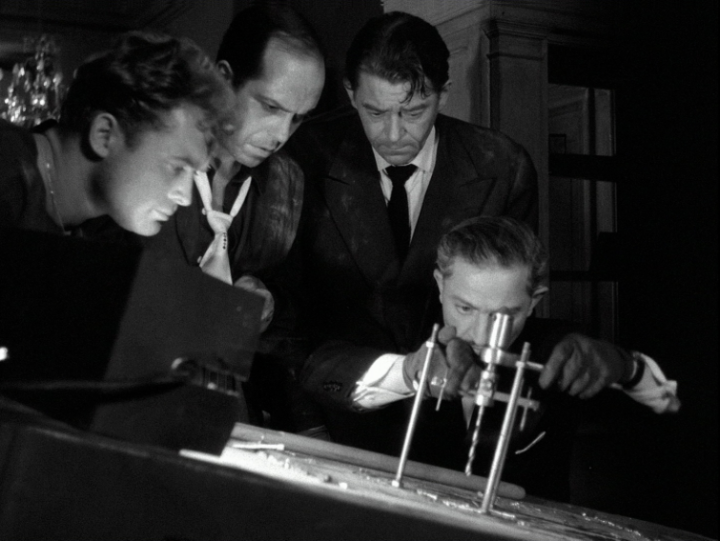 Up until the time when I found this film on Netflix, I never heard of it, and now that I’ve seen it, there is a lot to say.

Before we begin, what is “Rififi”?  It sounds like the name of a Poodle, I know.  But it’s actually a french word that means “Brawling” or “Fisticuffs”…not so cute now.  Rififi, or Du rififi chez les hommes (A Fight Between Men) is a 1955 french movie that falls into both French New Wave and Film Noir in its style.  It was directed by Jules Dassin, an American film director who was blacklisted by Hollywood in the 1950s due to “possible communist sympathies”, and moved to France in order to continue (and revive) his career.  The film itself is also quite fascinating, because of various factors; it had a very low budget, the production crew received low wages, and the main cast of actors were all “nobodies”…and yet…well, lets discuss it.

Our film centres around a group of Gangsters from different countries, who come together to perform a high risk but highly rewarding jewel heist.  First we have french gangster Tony “le Stéphanois” (played by Belgian actor Jean Servais), the oldest member of the heist, who was just released after serving 5 years in prison for a previous heist.  Then we have Jo “le Suédois” (played by Austrian actor Carl Möhner) a young swedish gangster who escaped prison time because Tony took the fall.  Mario Ferrati (played by french actor Robert Manuel) a happy-go-lucky Italian gangster who came up with the idea for the Jewel Heist, and lastly, César “le Milanais” (played by the film’s director Jules Dassin under the pseudonym Perlo Vita), an Italian Safecracker who helps them by getting the safe open.  Together, they hatch a plan to rob a Jewellery Shop in the first act, and it is the perfect crime.  And afterwards, in the second act, we get to see the flaws of humanity catch up with them.

Lets break down the film now.  Since the film was made in the ’50s, and it’s very straightforward in it’s approach, there will be no talk about CGI or anything like that.  The acting in Rififi is excellent, especially within the style of acting that everybody was doing at the time.  Nobody was bad, it was all rather low-key, but everybody played their part really well.  It’s proof that you don’t need a star actor to help make a good film, you just need someone who looks, sounds and acts the part they’re given.  The characters are quite an engaging bunch, and everybody, but especially Tony, have an aura about them.  Jean Servais as Tony has a bit of a Humphrey Bogart/Robert Mitchum feel to him.

The story in Rififi, though simple, is absolutely fantastic, and the scene where they are actually robbing the Jewellery is 1 of the best scenes in cinema history.  There is no music, and barely any dialogue.  It is all action.  You witness how these 4 men rob the place, and it was so well done, that even though it’s fictional, it ended up being used by real life bank robbers, in real heists for a number of years afterwards (it wouldn’t work today, unless your local bank doesn’t have security cameras and infra red burglar alarms.)  The aftermath was also really well done, and perfectly fits this film into the film noir genre.  The film itself is pretty dark, with some very dark subject matter, such as greed, drugs, the breaking of trust, broken promises, broken bonds, and bad decision making.  It also contains some pretty sarcastic dialogue, especially from Tony (it’s french, what do you expect?).

The cinematography is also well done, with the heist perfectly presented, as well as some very good action scenes (for their day).

Would I recommend Rififi?  Absolutely!  Despite having so many things that would put most cinema-going folk off before even giving it a chance (It’s black and white, french-speaking , old, with no blood, heavy but cleanly edited violence, sex (though it is at times kinky), or stars) it’s just so well made, so watchable and so interesting.  I really enjoyed it.  If you have Netflix, I would highly suggest looking for this gem.