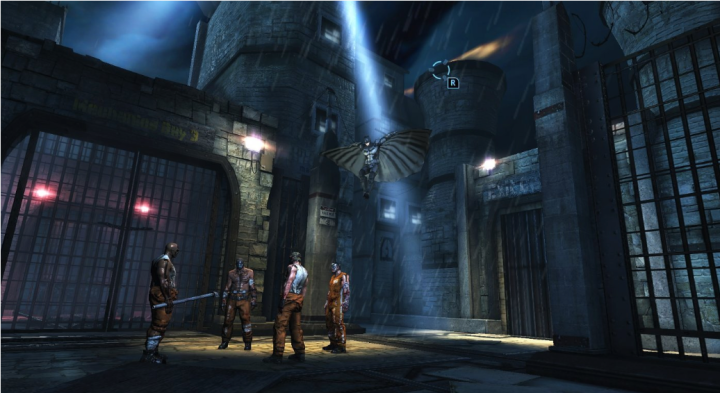 If you’re reading this review, chances are you already know the Arkham series quite well.  Asylum?  Fantastic.  City?  One of the best video games ever made.  Origins?  A very good attempt by a non-Rocksteady developer.  And Knight?  Still excellent.  But then there’s this game, which came out on the same day as Origins.  What can be said?  Lets find out.

Format-wise, this game is much more widely available than others in the series.  Do you have a PS3?  PS Vita?  Nintendo 3DS?  Xbox 360?  PC?  Wii U?  If yes, then Blackgate is available to you with varying quality.  I played the Playstation Vita version, and I’ve heard that the 3DS version is superior, so I lost out on that 1.  But lets focus on the Vita.

Our story is set about 3 months after the events in Arkham Origins (and Cold, Cold Heart, the Mr Freeze DLC) and is more or less designed to be the introduction of Catwoman to the Arkham series (in the same way we’re introduced to many of the villains through Arkham Origins who would go on to be more dangerous in Asylum, City and Knight).  A few weeks after Batman apprehends Catwoman and sends her to Blackgate Prison, a strange explosion happens there, leading to a scenario where Blackgate Prison effectively becomes Arkham City, as each building is taken over by a different main villain and his many goons.  The cell blocks have been taken over by The Penguin, the Industrial Area was taken over by Black Mask, and Administration was taken over by The Joker.  You can choose which bosses you want to fight in any order, and depending on who you leave to last, you’ll receive a different post-credits ending which involves that last Boss (like the Marvel Cinematic Universe is known for).  Throughout the game you receive different gadgets (much fewer than in Origins and other games) in order to get around and provide an additional way to beat bosses.  You’ll also receive key cards as the game progresses, which allow you into other parts of the Prison.  And lastly, both the key cards and the gadgets will help you unlock and find clues to cases, extra permanent health, and pieces to alternative Batsuits that can eventually be worn when the suit is completed (unlike Arkham City, Origins and Knight, where you usually buy them as DLC).

Now onto the breakdowns;  graphically and artistically, Arkham Origins: Blackgate is very pretty to look at on a handheld console.  The comic-book style cutscenes (designed to save space) are a nice touch, even if it feels a little less interactive compared to cut-scenes in the bigger budget chapters.  The grit and grime/textures are beautifully presented, and the character designs are well done too.

The voice acting is as roughly good as Arkham Origins as many of its actors appear in this, and Grey DeListle appears as Catwoman, but overall it’s not as good as Asylum, City or Knight.  Moving on.

The music borrows some of the same score from Arkham Origins, but in terms of original score, Blackgate is by far the worst of the Arkham series.  That doesn’t mean it’s bad,  it’s simply okay, generic, and has a slight edge of character that says “This might be something you hear in Batman”, but nothing too memorable in terms of a particular score, outside of that tune that mostly goes from a 1 to a 2 then quickly to the flat 3 and occasionally to a flat 7 after a 1 (in the minor key).

The story is rather basic and comes across as having little peril or consequence when it comes to Batman himself.  While other Arkham games have their horror moments, this doesn’t have any of that.  It’s also a bit on the old-school, simple side, as the “choose your boss order” aspect doesn’t change too much or provide much new material based on that choice.  In the end, I think it’s best to treat this game’s story like a Downloadable episode in Arkham Knight, or as a small bridge to towards the next big arkham story (Because it doesn’t exactly create a bridge between Arkham Origins and Arkham Asylum, or from Arkham Origins to the animated film “Assault On Arkham”, which is set in the same story).

The gameplay is very much a mixed bag.  Keep in mind what Batman’s strengths are; He’s a crime fighter and a detective.  Is there any crime fighting in this game?  Yes, occasionally you get to beat up some prison inmates (and I really do mean occasionally.  Because there don’t seem to be many inmates in the most dangerous prison in Gotham) and the bosses, of course.  Do you get to be a detective?  Yes, when you go into detective mode, you’ll find “clues” to tell you how Blackgate became swamped with anarchy on this night, and also to help you find ways to get around.  Unfortunately, the detective clues feel rather meaningless and in the end, I didn’t find all of them.  If you’ve played Arkham Asylum, you’ll also remember the wind-up false teeth that Joker left lying around.  These do return, and they’ll give you a trophy at the end, but they don’t provide you with much else, as this game doesn’t have the same RPG elements that make up the other games, and since The Riddler doesn’t appear in this game at all…actually, it’s best if we don’t consider The Riddler being used in this game (It’s 1 thing if he’s in a 3D open world, but not this!  Definitely not this!).  The battle system is much more limited than Arkham Asylum, but 1 thing I will say…and I’m not lying on this 1:  The boss fights are this game’s saving grace, especially The Joker boss battle, which is possibly the best 1 in the Arkham Series (if not, it’s at least the purest experience of fighting the Joker).

The Level Design…ouch.  In terms of level-design, I absolutely hate this game.  If you have ever played Arkham Asylum, you’ll know how much fun it is to simply explore a prison that is constantly changing, but at the same time, it was easy to get around.  Even Blackgate in Arkham Origins had a good design.  But this…this is terrible.  The game is done in the 2.5D format.  In other words, it is a side-scroller which then has Batman turning towards or way from you when he reaches the end of a hallway.  Sure, it’s different.  But the biggest problem is the layout.  The map tells you where to go, but not how many floors are in each section, which means that you could be going completely the wrong way, even if it appears to be in the right direction.  It’s so bad that my play through ended up being 2 or 3 times longer than the average run, all because I had trouble getting from A to B.  On top of this, there is an insane amount of backtracking in this game, with practically no way to make the tedious journeys shorter, outside of exiting the closest facility door and entering the only other door into the building (If there was a fast-travel aspect like in Origins, this would have been so much more bearable).  What is even sadder is the fact that I eventually got used to it, but this experience didn’t happen until I was at least halfway through the game.  Also, if you don’t use detective mode, scan the room (a secondary scan that didn’t exist in other arkham games) and wait a few seconds as you scan each highlighted part of the room, you would never know about the weak walls, weak floors, and electrical stuff that can be broken, because Batman doesn’t point to any of these things with his gadgets until he knows that you know about them first (in other Arkham games, detective mode shows everything you can do to progress, rather than you needing to drag your finger across the screen and hold it for a few seconds if you find something).  In the process, it is possible to be stuck in Blackgate…forever.

Would I recommend Batman: Arkham Origins: Blackgate?  Not on its own (play it after you’ve at least played Arkham Origins), and not for the Playstation Vita either.  Perhaps on the 3DS.  Arkham Origins is sometimes seen like a black sheep in the Arkham series, and while it’s not in the same league as the Rocksteady Trilogy, it’s no way near as annoying as Blackgate.  If you’re a huge Batman/Arkham series fan, and can either look past the terrible level design or get to know the Prison well enough to be comfortable, and are willing to spend no more than £10 on it, then sure, have a look at it, because the second play-through will certainly be more enjoyable than the first.  But be warned, keep your expectations low, as it’s nowhere near the quality of other Arkham games or comics, or film/s.  1 thing I will say, it is much better than Batman Returns on the Atari Lynx…good luck beating that game.

Gameplay: **1/4 (it’s higher because of the Boss battles)