Kind of an amusing choice in timing for this 1.  As Marty McFly recently arrived in the Future, which now means that the whole of Back To The Future is officially set in the past, I end up finishing easily 1 of the most interesting games that I’ve ever played, which also happens to involve time travel.  So, what can be said about a game which describes life in a nutshell?  Lets find out.

Life Is Strange is an episodic game created by Dontnod Entertainment (the Parisian game developer who also created the overlooked Sci-Fi Adventure game Remember Me) comprising of 5 episodes that started back in January 30th, up until Episode 5, which came out on October 20th (final episode was delayed by a month).  Our story is set in the fictitious town of Arcadia Bay, Oregon during the week of October 7th 2013, and centres around our main character, an 18 year old Photography Student named Maxine Caulfield (or Max to everyone else).  While visiting the little girl’s room in-between classes, she ends up witnessing the murder of Chloe Price, her childhood friend, by Nathan Prescott, the spoilt, drug-addicted son of the most powerful man in town.  Shortly after this, in a sudden effort, she develops the ability to reverse time, and in the process she rescues Chloe.  This then leads to what can be best described as…Strange…But in this case, it’s a likeable strange (depending if the Butterfly Effect interests you).

The graphics in Life Is Strange are very good, but also a little rough around the edges (I’m assuming that’s just the PS3 port though).  They’re about as good as Dontnod’s other game Remember Me, and from what I’ve seen of the PS4 version, the textures and shadows are a little more crisp, but they’re more or less the same game. 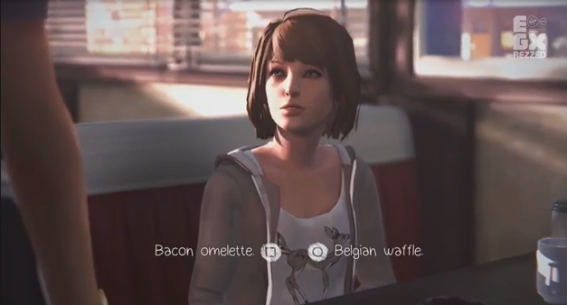 The gameplay can be described through a math equation and compounding: It’s episodic nature is borrowed from Telltale games (Sam & Max, Wolf Among Us, and The Walking Dead), the interactive multiple-choice elements borrow from Quantic Dream games (another french developer, who made Fahrenheit, Heavy Rain and Beyond: Two Souls), and the time-travel element comes from none other than the Prince Of Persia trilogy on the PS2.  So, The Walking Dead plus Heavy Rain plus Prince Of Persia equals Life Is Strange (in gameplay, this is).  In terms of gameplay quality, it does change per chapter.  Episodes 2, 3 and 4 are the best, and Episode 5 is the most linear.

The greatest strengths in Life Is Strange are in it’s story, themes and characters.  I can tell you now, no game (other than Canis Canem Edit and maybe even Gone Home) has ever made me feel like I was back in school and feeling those emotions again quite like this 1.  It’s a nostalgic feeling.  But also 1 that reminds you why school/college was a scary time to be 16/17/18.  While playing it, certain films come back to mind, such as The Fault In Our Stars (minus anybody having cancer), the anime film The Girl Who Leapt Through Time, and 2 another films that I fear would spoil the ending if mentioned (ask me if you play and finish it, or don’t mind me saying and can’t see the connection).  It has also been noted that Catcher In The Rye was an inspiration, and for once it wasn’t used as a scapegoat for killing famous pop stars or encouraging famous laughing hackers.  The dialogue is well written, and uses a lot of nerdy youthemisms that are rather adorable.  In terms of characters, there are a lot of archetypes, but also a lot of grey area development.  Max is clearly the quiet girl at school who would go under the radar, while Chloe is the grunge/punk rebel, Nathan Prescott is the rich kid and possible son of a stonecutter, Victoria Chase is a Heather/Cordelia Chase (see what I did there?), and Warren is basically Michael Cera if he was a hipster scientist.  In terms of quality in chapters, It starts off well, becomes really interesting for 3 more episodes, and then by Episode 5, it’s as good as Episode 1, and very different at the same time.

What themes are covered in Life Is Strange?  Lets see; there’s solitude, friendship, step-parent/step-daughter relationships, the grey area of others, coming-of-age, sexuality, drugs, school-life, time, past, present, future, the environment, privacy vs security, bullying, suicide, crazy/difficult parents, rebellion, gun usage, photography, ethics, respect, the hiding or reveal of truth, the demonstration of how our choices affect those around us, and also how in real life, we can’t exactly go back and fix our mistakes.

The music has Fault In Our Stars all over it, consisting mostly of guys picking soft guitar riffs and singing, or as I like to call it, Easy-Listening for cafe-goers.  Well, not really.  The original score is composed by Jonathan Morali, whose range includes ambience, tense piano playing, and sweet, soft, dream-like guitar playing that really do send you back to a certain time if you were a teenager once but not anymore.  Any musicians who come to mind?  Yes, Nick Drake is 1.  Other music featured includes songs by Jonathan Morali’s band Syd Matters, Mogwai, Foals, Sparklehorse and Amanda Palmer (Neil Gaiman’s wife).

Would I recommend Life Is Strange?  Yes!  Especially if you’re looking for something that’s full of humanity, themes on struggle, identity and purpose, and feelings of what it was like to be that age again (unless you are that age and playing it right now).  The creators have done their homework, and while it’s very much set in a Hipster culture, the heart and essence of adolescence remains all too clear from beginning to end.  However, it’s not a game I would recommend to anybody below high school age…Catcher Of The Rye really rubbed off in more ways than just teenage angst.