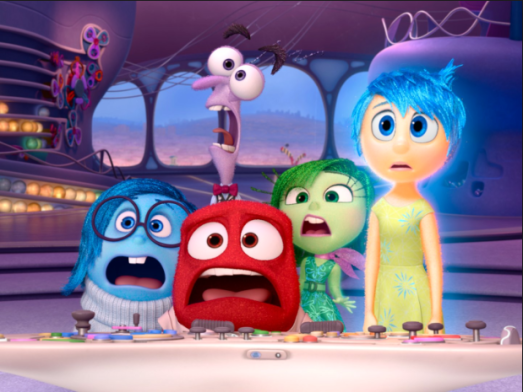 Pixar’s Inside Out has 2 stories, 1 involves a girl named Riley who has moved to San Francisco from Minnesota and starts a new school.  The other involves the emotions personified, Joy and Sadness, getting lost, along with Riley’s core memories, into the giant library known as Long-Term memory, and they have to get back (because if they don’t, Riley will never know how to feel Joy or Sadness again, but she will feel Fear, Disgust and Anger).

Graphically, it’s fantastic.  The voice acting was brilliantly chosen, and the characters themselves are full of colour.  Michael Giacchino’s music is beautiful and capable of many emotions (much like the characters), and the story is basic, but very well told, full of variation and full of heart.

Would I recommend Inside Out?  Yes!  I watched it at…possibly the best possible time, as I experienced a loss at the time of viewing, and 1 of the main themes of the film just…spoke, right there and then to me.  Proving it’s a great movie to watch when happy…but also an important 1 to watch when sad.  Well worth the viewing, and it’s also very funny.