I want to watch/play Steins:Gate at some point, and I heard that this is a prequel, so I decided to watch this first, as I have no way of playing the game version (Perhaps somewhere down the line).  So lets begin.

Chaos;Head is an anime TV show that only lasts 12 episodes, and before it came out it was already a video game in Japan and a manga franchise that continues to grow to this day (apparently).  Set in Shibuya, Tokyo in the Autumn of 2009, our story revolves around Takumi Nishijō, a blue-haired high school student who occasionally goes to school (enough to have an acceptable attendance record), but usually spends most of his time living in a large shipping container on top of a tall building as a hikikomori (Someone who chooses to isolate themselves in their room for many months, and sometimes even years at a time).  As far as he’s concerned, he has everything he needs, including the toy collection of his favourite anime character, who appears to communicate with him like a real person (giving a whole new meaning to “In My Dreams”).  One day, word starts going around about a series of murders and deaths happening, known as the “New Generation”.  While online, Takumi meets a user called “Shogun”, who sends him a ton of image links, with 1 being a brutal murder scene, of a man who had been pinned to a wall with stakes.  The following day, after school, Takumi witnesses the murder scene in person…the same 1 in the pictures…and at the scene, is a mysterious pink-haired girl…the probable murderer.  After this, Takumi’s hikikomori ways increase, as he tries to pretend that he didn’t see anything.  However, things become difficult, when the pink haired girl starts attending the same classes as him, and tells him that they are basically best friends…even if he doesn’t know the connection they had before the day they meet in school.  At the same time, Takumi starts being tailed by 2 detectives, and several other girls around town, and then the paranoia sets in, as he’s unsure what’s real and what’s fantasy, and even hallucinates from time to time.

Imaginary Friends come in many forms

Now to break it down into Building blocks:

The Animation was done by Madhouse Studios, who have produced numerous modern classics, including The Girl Who Leapt Through Time, Summer Wars, the Death Note anime, and every film by late great Satoshi Kon (Perfect Blue), so you’re guaranteed a really good quality job.  This is by far the best aspect of the show.

The Art Style’s good, particularly in its colour palette and its presentation of Shibuya as a living, breathing city.  The character designs are good, but not enormously memorable.  The main characters are 1 guy and 6 girls wearing tanned school uniforms with tartan skirts/trousers brandishing swords that look like they’re from Soul Calibur.  In terms of hair design and eye design, I feel like I’ve seen all of this too many times – and while it’s very acceptable and safe, like I said, it’s not very memorable. 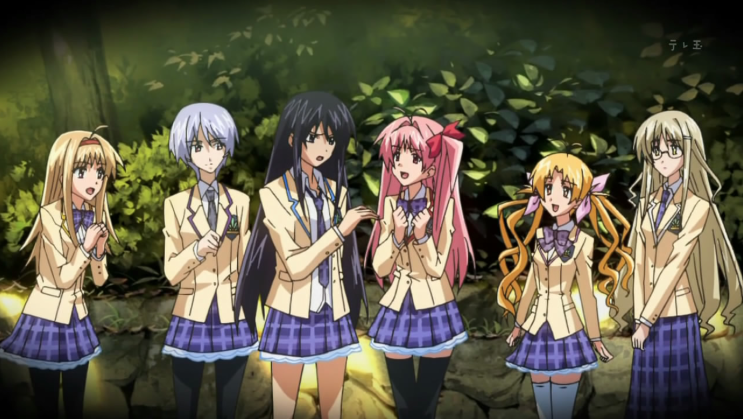 I feel like I’ve seen these designs before in different shows.  The school jacket and skirt combo is what sort of helps in the distinction.  But then there’s the archetypes they play out on screen – can you tell what their personalities are by looking at them?

The Story is…quite messy, and some would say that merits a rerun.  But it’s not a great kind of messy.  It created far too many rules for being a 12 episode show, to the point that it’s rather confusing and at times a bit boring.  It’s a rather boring mystery, that would have been worse if the horror piano didn’t play over some scenes.  The story isn’t that well executed and the dialogue is a bit juvenile.  But it’s possible that this was directed at a 12 year old to give them a taste of “Matrix-eque storylines”.  Also, the whole clique of girls with archetype personalities doesn’t have many distinguishing features that make them stand out from other anime.  Then again, it is about teenagers saving the world and grown ups possibly “not getting it”, who knows.

The Characters themselves are…Meh.  Takumi’s not the most likeable main character, and his “disinterest in 3D things” sounds…Okay, I’ve heard about guys (real people, I mean) who marry characters on their Nintendo DS…But…um…Okay, move on.  Unlike most anime protagonists who seek to better themselves, Takumi’s not interested in being anything more than he is.  He’s like a teenage version of Qohen Leth (Christoph Waltz character in Terry Gilliam’s film ‘The Zero Theorem’), but unlike Qohen, who is waiting for “his time” (i.e. his phone call), Takumi is completely content with the life he had, and even when stuff starts to change, he’s only really interested in escaping back into fantasy. Then you consider the 6 girls in it:  Rimi (pink haired girl) is Takumi’s future girlfriend by default (the beginning of the show indicates this) and doesn’t have much else.  Ayase (Medium-length, Light Blue-haired girl) is the quiet and reserved 1 who sings in the band Phantasm.  Yua (Blonde with glasses) is the clumsy and nerdy 1 who suspects Takumi, and is a bit 2-faced to him (or so he thinks in his hallucinations).  Sena (Long dark haired girl ) carries around the soul calibur sword while eating ice lollies (yay!  character development!) and is very much the warrior of the bunch.  Kozue speaks through telepathy rather than moves her mouth (she barely appears enough for us to care) and lastly there’s Takumi’s sister Nanami (Blonde with red hair band), who puts up a strong front, and despite being younger than him, will occasionally mother him a bit, and argues a lot with him (out of love)…she’s the best character in the show.  The villains are a very 1-dimensional, with some of them (primarily the 2 who appear in the intro), barely appear enough to be of any significance to the story.

The voice acting has a good continuity to it, in the sense that the voice actors from the video games reprise their designated roles in this anime.  It is of quality, much like the animation (but not as much as that), and it would be enough to please fans.

The Music has some great moments that set the scene well. They’re nowhere near in league with Joe Hisaishi or Yoko Kanno (I know I’ll keep mentioning them within the context of anime, but for me, those 2, along with Kenji Kawai, are the standard-bearers of all anime music), some of it makes great ‘homework music’, like the theme for Shibuya and SEIRA. The in-show band, Phantasm (Fronted by Ayase, 1 of the girls chasing Takumi), also has a few good tracks, such as ‘Haruka Naru Idiyona’, that make me think it’s a J-Pop answer to the american rock band Evanescence. Other songs are quite beautifully haunting, others are pure anime cheese or incredibly cutesy, including the end theme that somehow manages to mix happiness and sadness into 1 song…others sound like they might belong in a Dead Or Alive themed Porno, and others are a bit crap, to be fair.

Would I recommend Chaos;Head?  To be honest, I don’t know.  If you’re looking to dive into the Steins;Gate Universe and want to expand upon it, perhaps it’s worth a look – and perhaps if you got the manga and the games, it will at least provide a ton of justification and development to the show, as you’ll know these characters a lot better (Probably guaranteed).  But the show on it’s own, really isn’t up to much.  I’ve seen this type of story done better before, as aspects of it remind me of The Matrix.  I’d say see it once, and then never again, unless you really got something out of it, or have a nostalgic attachment to it. It was very disappointing, and far too ‘otaku’ for my taste, i.e. Archetype girls with quite 1-dimentional personalities, and a main character who tells you his problem, rather than simply act it out in a show-don’t-tell fashion.  As good as Madhouse were at animating this, they didn’t write it either.