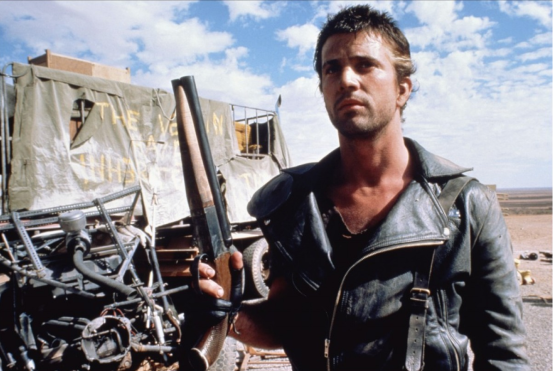 Now onto the 2nd film of the original Mad Max trilogy, and possibly the 1 people think of most when they think of Mad Max, and if you’re reading this review, it suggests to me that you’ve seen Mad Max 1, so if you haven’t, beware, because this will spoil some of that film.

Set 2 years after the original film, Mel Gibson returns as Max Rockatansky, a former policeman, and now a man who could simply be known as a survivor.  At this stage, Max has lost everything that made him who he was.  His family is gone.  His friends are gone.  He got his revenge…but now what?  Unlike Mad Max 1, which was a dystopian future, Mad Max 2 would be closer to looking like a post-apocalyptic film…But at the same time, a part of me feels like calling it a futuristic western (not a space western, but a futuristic 1).  It uses a lot more of the Australian outback, and rather than painting a vague picture such as “The gangs rule the highways” (Why do they rule the highway?  It isn’t really addressed), a purpose for this has now been explored.  The purpose?  Petrol.  Without petrol in this world, you’re completely screwed, and highway bandits want to kill you and/or crash your vehicle, purely to collect your petrol.  Along the way, Max finds a small community who are guarding an oil rig that is constantly being attacked by a group of bandits, led by Jason Voorh–I mean, Lord Humongous (played by Swedish Olympic Weightlifter Kjell Nilsson), a 7 foot tall bodybuilder wearing leather underpants and a hockey mask, while basically talking like Bane from The Dark Knight Rises…or at least a similar character archetype.  You might also notice he doesn’t get much sun burn.  Max then ends up helping them fight the bandits, and helping them get a truck carrying lots of oil to a newer and better land.

So what can be said about Max’s story in this film?  Two words; An episode.  This is simply a film about a small period of time within Max’s journey through oblivion, and includes a 3rd person perspective on the events.  The fact that Mad Max 3 exists, and Fury Road exists, lets you know what Max’s fate is already.  He enters into a strange and dangerous situation and comes out of it somehow, like Tyrion Lannister in Game Of Thrones.

The acting in this film was a bit different to 1, and at times felt a little cartoony…but cartoony acting usually leads to the portrayal of interesting characters.  Mel Gibson is clearly playing a very different character, even if Max is still his name.  Once a tough, but innocent and happier character in ‘1, Max is basically Clint Eastwood as The Man With No Name in the Australian Future.  A key difference between the 2?  Max has a sadness to him.

The characters were memorable in their appearances and their personalities.  But to be honest, if I was to choose between Lord Humongous and The Toecutter, I would say the Toecutter is better.  Also, Humongous’ lackeys are colourful, but not too distinguishable outside of Wez (the pink mohawked brute), Toadie (the 1 who loves the sound of his own voice) and The Golden Youth (The Blonde ’80s Rock Star-lookalike who probably plays a role in the gang’s evidently homo-erotic past-times).  Other memorable characters include The Gyro Captain (the only character in this film who can fly), Max’s dog, and The Feral Kid (a young boy with a razor-sharp boomerang).

The soundtrack in this film is excellent and once again done by the Brian May who didn’t play guitar for Queen.  His work maintains the use of brass and drums, but it sounds a little less like Planet Of The Apes and more classical in sound…some aspects even make me think of it sounding like a classical version of the Scarface theme.

The action scenes in Mad Max 2 are…insane, even by today’s standards.  No CGI or anything like that.  They really did create those explosions and multiple car accidents.  The evident health and safety breaches back then would probably carry a prison sentence today with some of the things they were doing!

The cinematography in ‘2 is different to 1 because it was done by Dean Semler instead of David Eggby.  Unlike Eggby, Semler doesn’t put himself in the same amount of danger, but he still captures the film beautifully and in a different way.  Utilising more helicopter views and much less sitting backwards on a motorcycle.

Would I recommend Mad Max 2: The Road Warrior?  Yes!  It’s a very simple, but brilliantly made film with a lasting influence.  Yes, I might prefer the villains in the original, but this was an overall stronger film, and 1 with a much clearer goal in mind.  It’s also a really violent film, even by today’s standards, and it was presented incredibly well.  Joss Whedon called it a perfect movie, and there are certainly some similarities between this and something he would do (not so much in dialogue, but in choices).  Either way, it was 90 minutes well spent.