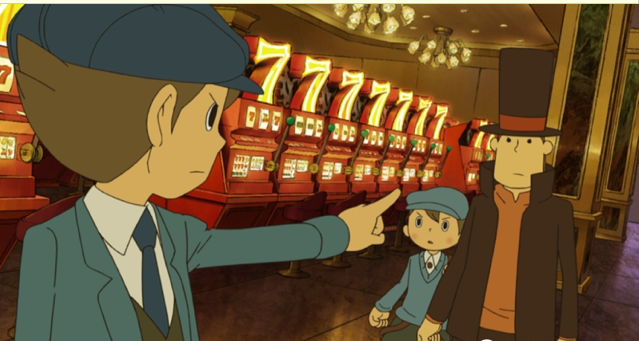 Trilogies.  I’ve done 1 before, so today I’ll do it again.  Because sometimes there is just enough to say without spilling the review into Middle Earth proportions.  So, lets talk.

The Professor Layton games are a series that partly got me interested in getting a 3DS (due to the backwards compatibility and because I was way behind in terms of some excellent DS games), and after seeing the anime film “Professor Layton and The Eternal Diva” (need to watch that again before reviewing it) I became very interested in checking them out.  I’ve mentioned this as the “first trilogy” and that’s because I’m reviewing the first 3 games that came out; The Curious Village, Pandora’s Box (aka The Diabolical Box) and The Lost Future (aka The Unwound Future).

Professor Layton stars, who else, Professor Hershel Layton.  An english archaeology professor who loves drinking tea, solving puzzles and is full of surprises when it comes to skills.  He is usually followed around by his self-proclaimed apprentice, a young boy named Luke Triton, who has the ability to communicate with animals.  Together, they go from place to place and solve both puzzles and mysteries…and as small and seemingly insignificant as it sounds, that’s what the games are all about.  In The Curious Village they try to find an item known as “The Golden Apple”, which is mentioned in the will of the man who basically owns the town (along with roughly 9 other mysteries, including murders).  In Pandora’s Box, Layton and Luke go cross-country on a luxury train to solve the mystery of a box that kills anybody who opens it.  And lastly, in The Lost Future, Layton and Luke receive a letter from Luke himself…10 years in the future…and they end up travelling to a London that neither of them recognise or even like.  I’m choosing not to spoil any of the stories, but to say the least, the mysteries are fantastic!  Very creative, well justified and with a fun reveal to it all.  Fantastically written these 3 games are!

Along with very well written stories, you have fun and well developed characters, and you can tell that the creators chose to make Professor Layton a role model to young boys by portraying him as a gentleman who places emphasis on his manners and behaviour (It reminded me of a chapter in a book called “Even A Monkey Can Draw Manga”, which emphasised that anything targeted at a younger audience needs to have a balance between what kids want and what their mothers or fathers are happy enough to buy them).  Meanwhile Layton’s approach plays off of Luke who is obviously learning to become a gentleman, even when he’s still young and impulsive.

The anime cut scenes look fantastic on the DS, and there is a great humour to them all.  Reminding us of the great flexibility that comes with animation. The music in the Professor Layton games is excellent with some tracks often recycled from game to game.  To the point that when any of them are heard outside of the experience, you know instantly “This is from Professor Layton”…and just as importantly, the soundtrack is memorable, likeable and full of character (It might even get some people trying to play it on piano, violin or  accordion)..In fact, it sounds quite french.

Now onto the aspect that sells the game – the puzzles.  With well over 100 puzzles in each game (138 in The Curious Village is the minimum).  There are the mandatory puzzles that advance the story, and there are the 2 sets of side puzzles. One set can be found in the pause menu, which includes about 3-4 mini games that can be unlocked as the story progresses (or when you have solved certain puzzles) and after you solve them, you’re treated with (what else) more puzzles and a companion that will sniff out hint coins for you (the gum in Puzzle Agent).  The other set of side puzzles are often found either in the background or they’re “problems” that people around the towns are having (Their reasons for providing Layton with puzzles remind me of the thugs who run up to fight Kazuma Kiryu in the Yakuza games.  Only here Professor Layton chooses not to beat the snot out of anybody…unless it involves owning someone via solving their puzzle).  Some puzzles are simply harder versions of other puzzles or with a different coat of paint.  Others require a lot of “thinking outside the box”, which makes some of them particularly interesting.  Thankfully though, the puzzles in Professor Layton progress in their difficulty, rather than the Puzzle Agent approach of only having very easy or very hard puzzles.  Which game has the hardest puzzles?  Possibly The Curious Village.

Would I recommend these games?  Absolutely!  They’re chock-full of charm and character.  Excellent puzzles.  A great visual appeal that looks more like a western cartoon rather than a Japanese Anime, but is approached like an anime (as part of Japan’s mentality that even Spongebob Squarepants and Spiderman cartoons are anime, while western mentality is that anything from Japan is anime and non-japanese anime is simply inspired by Japan).  The characters are very colourful, the stories are excellent with some very surreal scenarios that are closer to steampunk, sci-fi and horror, and the humour is of a clean, universal nature (even if Pandora’s Box includes a Madam who runs a brothel), and the music is among my favourite things about the games.  The endings of each game are very emotional, and justify going through each 1.