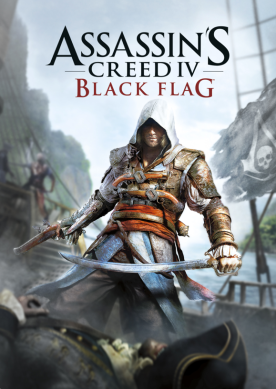 After reviewing Assassin’s Creed 3 and Liberation, I’m guessing some of you saw this 1 coming.  With Unity just around the corner, to be set in a country with a sense of humour that has influenced me since Amelie, I figured it might be good to play this 1 first…even if I might not be reviewing Unity for a long time, as I don’t have a PS4.  Now onto the obvious question; How is Assassin’s Creed 4?  We’ll begin by discussing and even comparing it.

Assassin’s Creed 4 in set during the Golden Age of Piracy in and around the Islands near Florida, including Cuba, Jamaica and the Bahamas, and revolves around the life and work (collateral damage) of a man named Edward Kenway.  Edward is from Swansea, making him the 1st Welshman to appear in the franchise.  It will also be recognised that unlike our previous Assassins such as Altair, Ezio, Connor and Aveline, Edward doesn’t exactly fit in with their kind.  How is this?  Am I suggesting that this Assassin’s Creed game involves playing as someone who isn’t an Assassin?  Correct!  Edward is not an Assassin, but rather a Pirate seeking his fortune.  After killing an Assassin who sank his ship, he steals his robes and travels to a destination written on a letter the Assassin was carrying, as well as some crystal cube.  He arrives at the destination, only to find that he will be playing the role of an Assassin who is defecting to the Templars and joining their cause.  So what does poor Edward end up doing?  Well, he ends up ruining everything.  He not only annoys the Templars, but he annoys the Assassins as well.  After acquiring his own ship, meeting up with other treasure-hungry pirates (including Blackbeard, Mary Read, Jack Rackham and Anne Bonny, and of course, “Black” Bart Roberts.) and even offering to make amends with the Assassins, our adventure begins, and you know what?  I really didn’t mind.

Assassin’s Creed 4 can be described in 2 ways.  1 way involves saying “This game improves on everything Assassin’s Creed 3 introduces and finally has much better characters, background and story.”  Another description is that quality-wise it is like a threesome between the controls and gameplay elements of Assassin’s Creed 2 and 3, and the quality characters and storytelling of both Assassin’s Creed 2 and Assassin’s Creed Liberation.  To make it even simpler, this is easily 1 of the most fun games I’ve played, not only from the series, or on the PS3, but ever.  I loved this game.  So much so that I rate it up there with Assassin’s Creed 2, it was so enjoyable.  While Assassin’s Creed 3 gave you plenty to do, it felt boring after a while.  But with ‘4, you have plenty to do, but it’s still really good fun!  I took great pleasure in captaining my own ship in order to capture or sink other ships (usually owned by the English or Spanish), as well as upgrading this ship (called The Jackdaw) so that I could eventually go after ships with greater rewards, and even try my hand against the legendary ships (Including El Impoluto…1 of the scariest battles I can remember having in a long time).

The graphics are about as good as the PS3 can get (from a game not called The Last Of Us), I loved the backgrounds/settings, and the characters in this were absolutely awesome.  If you’re an Assassin’s Creed veteran, you’ll be happy to know that the game focuses almost entirely on the story of Edward Kenway.  The Desmond Miles story continues to a much lesser degree (Yay!!), but rather than it being about Desmond Miles, it is now all about you!  In a breaking-the-forth-wall fashion, the main baddies from the series, Asbergo, have now repackaged themselves as an entertainment company, where people can experience exciting aspects of the past like they were actually there.  Or lets say they are “employed” to experience it.  To make it even more amusing is the fact that Ubisoft (creator of the game) mention themselves as the 1s working with Asbergo to make this happen.  A nice little in-joke.

The biggest complaint I have about the game is actually the battles.  Whether or not they were trying to be more realistic, or whether this was a bug, it has to be pointed out – multi-man battles no longer have a rhythm to them, and sometimes you will be attacked by someone who is off camera, making you unprepared.  Yes, it does increase the difficulty, but to be caught off-guard like that can get very annoying, particularly if you’re surrounded by Brutes, the big 1s with axes that can’t be countered.

Also the collectables are rather awesome.  Which includes old naval songs called Sea Shanties.  If you collect the music scores that try to fly away from you, they will eventually be sung by your crew on the Jackdaw, providing us with a greater appreciation of songs such as Drunken Sailor, Fish In The Sea, Lowlands Away and Johnny Boker.  If only music in Skyrim was this good.  The actual music score is also awesome, yet different to the rest of the series.  It was composed by Brian Tyler, who also did the music score for another little gem called Far Cry 3, which is about surviving on an island full of modern day pirates.  For some reason, this was perfect for him.

AC4’s DLC is very good, but it’s not the best.  The multiplayer aspect is great fun, and for me it was great to get an extra story involving Aveline (1 of my favourite characters), however at only 4 missions long, it doesn’t really add anything new to her, other than maybe suggest a teacher-role in her later years.  She still has her french sarcasm though.  And then there is Freedom Cry, which focuses on Adewale, the trinidadian slave who became Edward’s Quartermaster. and eventually a member of the assassins and a captain of his own ship.  His story focuses primarily on the Maroon Rebellion, and while slavery was evident in AC4, in this story it’s everywhere!  Thankfully, Adewale is much more interesting than Connor, so it was good, as he was already an interesting but mysterious character in AC4…consider his partnership with Kenway to be much better than the 1 between Virgil and the Million Dollar Man.  I would consider Freedom Cry to not only be an extra to AC4 to develop Adewale.  But also as a stand-alone taster of what the full game can actually be like if you end up buying Freedom Cry as a stand-alone without AC4.

So, conclusion.  If you like Assassin’s Creed games, this 1 is easily in the top 2 or 3 best of the series.  If you like Pirates, you’ll like this game anyway.  If you like Pirates Of The Carribean, consider this to be like the harsh reality of your favourite characters.  If you’re an avid video gamer, for goodness sake get this game!  It is 1 few Assassin’s Creed games that (almost) requires no other instalment in the series, and if it becomes your first taste of the AC series, then I think it will interest you in the rest of the story.  However be warned that this is the most advanced instalment of the series in terms of gameplay so far, so consider the times when you go backwards.  I still consider Assassin’s Creed 2 to be a 5-star game, but it’s a 5-star game within the context of its release in 2009.  Anyway.  It’s a game that should be in anybody’s game collection, whether it be from this generation’s consoles or the last 1.