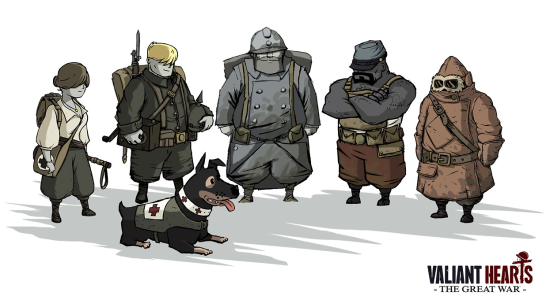 After playing this game, my opinion on this matter is now officially laminated.  Video Games are not only fun, but they can be classy and they can be art.  This is one game that truly seals that fate.

Created by UbiArt Framework (who also created Rayman Origins, Rayman Legends and Child Of Light), Valiant Hearts: The Great War is a 2-D side-scrolling puzzle-adventure game that follows the stories (inspired by letters written during this time) of 4 fictional characters, who, 100 years ago this year, would have fought and lived through 1 of the biggest bloodbaths in world history – The 1st World War.  We follow Emile, a French grandfather who is drafted to fight in the French Army.  Karl, a young German father, and Emille’s son in law, who is forcibly separated from his wife and baby son, sent back to Germany, and made to fight in their Army.  Freddie, an African American who joins the French Army after his wife was killed during a German Raid led by the fictional antagonist Baron Von Dorf, who is also Karl’s Superior Officer.  And lastly Anna, a Belgian student who is also a battlefield nurse living in Paris, and whose father is kidnapped by Von Dorf in order to create advanced weapons.  Along each journey, they are all accompanied at some point by a dog named Walt, who helps greatly in all of the puzzles he appears in.

If you assume that this game will follow the trend of first person shooters like Call Of Duty or Medal Of Honor where 1 side is good and the other is evil, you’re dead wrong.  This game has a lot more class than that.  It’s made clear that there were good and bad on both sides, and much like films such as Paths Of Glory, the most blood-thirsty men were often the 1s who sent others to their doom while they ate and drank like kings in greater safety.  Along the way, you can find collectables littered throughout the levels, with each item providing a descriptive insight about what it was, how it was used, and what role it would have had in the war.  Items such as helmets, postcards and letters.  All of which really added depth to the horror and the humanity.  On top of this, each level has different “Historical Facts”, which includes coloured photographs, describing the scenario of each level you take part in (with each level more or less representing a different side and time of the war, such as the underground wars and the trenches).  We also get diary entries from our main characters, describing different points in the story.  To see these, you have to pause the game in every level, otherwise you’ll miss it.

Now lets talk about the characteristics in its make up:  The game’s visual style and graphics are that of a cartoon, and it looks really well, complimenting the horror with a cute and humorous presentation (much like how Barefoot Gen, a cute-looking manga/anime, told a terrifying and graphic testimony on Hiroshima when the atomic bomb landed).  Outside of the narrative between levels, there is no dialogue, just pictures in speech bubbles, which makes the puzzle-solving a little easier and gives a better idea of what you’re looking for in order to move forward.

The music was composed by Peter McConnell, who also did the music for the Monkey Island games, Sly Cooper games, many Star Wars games and Psychonauts.  He did a phenomenal job, doing everything either on piano or with an orchestra.  Everything he did just fit perfectly.  However, his music isn’t the only stand-out.  There are also car-chase levels that incorporate classical music into them, and require excellent memory and rhythm.  So you’ll be dodging bombs, bullets, fences, other cars and tanks to the likes of Bhram’s Hungarian Dance and Rimsky-Korsakov’s Flight Of The Bumblebee.  This part of the game always made me smile.

Despite its amazing presentation, story, characters and music, I’m sad to say that the game does seem to hold itself back when it comes to the gameplay.  The gameplay and level design choices themselves are not a problem, in fact I would say they’re very good, yet simple at the same time.  The biggest problem for this game, particularly for long-time gamers, is the difficulty.  A majority of the puzzles are quite easy, some too easy, and they don’t become that much more difficult as the game progresses.  It doesn’t mean you’ll breeze through it with great ease.  In fact, I died in the game a number of times, due mostly to poor timing and trial and error.  At times, I will decide to look at a hint for help if I’m completely oblivious on how this can go forward.  But if you explore your entire play area, you’ll start to see connections, and then it’s all about doing certain actions in the right order.

Overall: If the puzzles provided a stronger challenge, I would classify this as a perfect game (5 stars), but everything else about it is fantastic.  The game was obviously created with a lot of care and consideration, and it is a fantastic tribute to humanity during a time and place that was far from humane.  100 years have now passed since those days began.  May they be remembered for another 100 years to come.