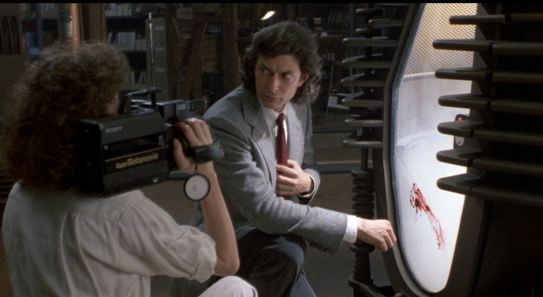 Before you ask me, no, this is not a remake of the original 1958 movie that I’ve reviewed in the past.  Rather it’s a movie that is based loosely on the same source material (the novel about a man mixing with a fly while trying to transport matter) and tells a completely different story with it.  Along the way I plan to make comparisons between this and the 1958 film.

Set in modern day (1986), this film chose to focus less on the horrific scenario, and instead incorporate it into a character study.  It cuts out the murder-mystery aspect of the original film, as well as cutting down on the supporting actors in order to focus almost entirely on our 2 main characters: Sethaniel “Seth” Brundle, the Scientist who builds the Space Matter Transporter (played by Jeff “Ah, um” Goldblum), Veronica “Ronnie” Quaife, a journalist looking for a story, (played by Geena “My Face Is Awesome” Davis), and main supporting character, Stathis Borans, Ronnie’s Editor and former lover (who lusts after her so much that he’s vocal about his fantasies), played by John Getz.

Our film’s pace is quite fast at the beginning.  Basically telling the audience “Screw introductions, build-up and murder mystery, lets see the machine already”.  Seth meets Ronnie at a science convention, where he’s more or less approaching her to get laid by saying he has something that would make these other scientists redundant.  Coming back to his home, which looks like an abandoned warehouse, but is a live-in laboratory, he tries to woo her with his classical piano playing.  Feeling her time is being wasted, he finally shows off the device and how it works, and afterwards she becomes interested.  He had no problem putting her stocking into the machine, but like the original film, he has a problem transporting flesh, which led to a scene that, to say the least, was much more disturbing and graphic than the original.  After finally getting the flesh transportation just right, and at the same time believing Ronnie was still seeing Stathis, Seth decides, while absolutely plastered, to go ahead with the transportation of the human form…and much like the original film and the book, a fly gets into the machine with him, and this is where everything goes downhill for him.

Unlike the 1958 film where the man and fly are still 2 bodies, but have evidently switched some physical characteristics.  Seth has actually absorbed the fly, and its DNA is now part of his.  Unaware that the fly entered the pod with him, Seth believes that the machine has taken out his physical flaws and impurities, making him incredibly athletic and strong.  At the same time, it is evident that his behaviour is changing, from talking quickly, to eating tons of sugar, to having lightning quick reflexes.  But it all goes downhill from there.  With the super strength and speed, came the insect-like hairs growing on his back, the flakey, scabby skin on his face, and a personality that was starting to become more arrogant and greedy.  Did I mention he eventually starts throwing up over his food before eating it?  How about losing teeth and nails?  I’m not going to spoil any more.

Right, lets break it down now.  How does this version of The Fly compare to the 1958 film?  The answer is it’s different, but it’s also better.  The original was very good, and it would have been scary for the time.  However, ’86 Fly would have had them running out of the theatre, and probably become the Human Centipede 2 and The Exorcist sharing DNA of its day.  They wouldn’t have been ready for it.  The special effects were done by Chris Walas, who also created the Gremlins and did the face-melting ark of the covenant scene in Indiana Jones: Raiders Of The Lost Ark, so you would know you’re in for something that looks amazing, and scary, even today.  Fantastic stuff.  Roughly on Rob Bottin’s level.  Acting-wise, everybody was great, even Goldblum surprised me.  I usually overlook his work, but he did an awesome job playing this insecure scientist who gains his confidence before gradually transforming into a monster, and then looking for a cure, even if it meant being an inhumane ass about it.  I also find it unfortunate that Geena Davis didn’t recover after Cutthroat Island.  The character development was much better in this than the original as well (considering Vincent Price is in the original, I almost hate saying it).  The music is by movie composing legend Howard Shore, and did a great job maintaining a more classic feel.  The story was also rather awesome, balancing the romance between Seth and Ronnie, while also showing how Seth’s transformation is greatly affecting their relationship, at first for good, and then for the downward spiral.  Leading to fear, some hard choices, and grim sacrifices.  It was focused and tight, without very much excess baggage.  You might also find that compared to the original, this is a much, much kinkier film.  One that plays on the imagination and is even pretty hot without showing anybody’s wedding presents.  More Hitchcock, and less Game Of Thrones in approach.

Overall, a really good and well focused horror movie with great special effects, acting, characters and story.  However, it’s possible that the beginning was a bit rushed and the end was maybe a bit abrupt (or maybe it was perfectly fine the way it was, like I said, it was kept tight).  Did I enjoy this better than the original?  Yes.  Is it worth seeing?  Yes, if you can handle the gore and gross stuff.  Is the movie epic?…No, but it’s easily 1 of the best horror movies of the 1980s.